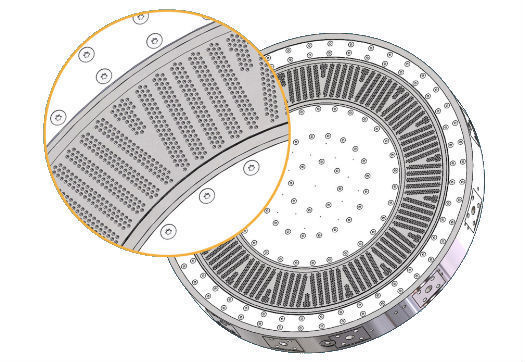 Designed for producing polyolefins and capable of achieving throughputs of 60 to 70 t/h, the new pelletizer covers the medium capacity range. The pelletizer's large die plate will be manufactured from a newly developed material which is highly resistant to both abrasion and corrosion and can double service life.

The new UG 750W pelletizer is an economically attractive solution which bridges the existing gap in capacity between the UG750 with its maximum throughput of 55 t/h, which is very widely used in PE applications, and the much larger UG1000 for throughputs of up to 82 t/h. Based on the UG750, the new pelletizer is equipped with the extended cutting surface from the UG1000. Thus, the system makes use of components which have proven themselves over many years both for the die plate/blade system (UG1000) and for the mechanical components blade shaft bearing, pelletizer hood and drive train (UG750). Due to the wider cutting circle and an optimized arrangement of the die holes, it has been possible to increase the number of holes in comparison with the UG750 by just about 27% to over 5700 and so achieve the desired increased throughput.

Because it makes use of products from Coperion's existing range, the UG 750W offers those users who already have a UG750 pelletizer the option of achieving a distinct increase in pelletizer throughput. All that needs to be done is to replace a small number of components, so making such an upgrade very manageable both technically and financially.

The UG 750W's large die plate will be produced from NikroDur, a wear protection material which Coperion has jointly developed with DEW Deutsche Edelstahlwerke GmbH. In comparison with conventional ferro-titanite, this metal matrix composite produced by powder metallurgy has at least 50% higher wear resistance combined with more than one third higher corrosion resistance. The material's one fifth lower thermal conductivity optimizes plate temperature management and the cuttability of even low viscosity melts. In addition, NikroDur's thermal expansion properties, which match those of the base material, permit an optimized arrangement of the individual wear protection segments. In pilot applications, using this new material has doubled service life in comparison with the previous state of the art.