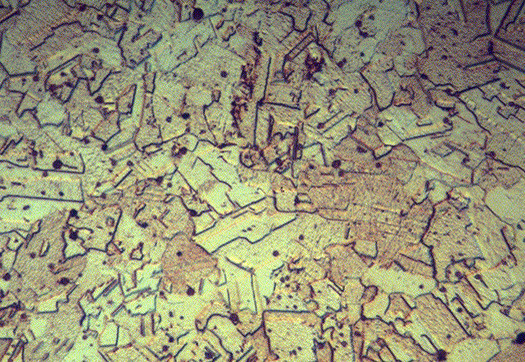 Mankind has always been attracted to secrets of different kind, hidden places and escape tunnels, documents that are not intended for everyone's eyes. Some people want to hush them up, some people want to make them public or even start to scandalise and others '¦. want to search solutions in an efficient and objective way.

Scientists and engineers are definitely of the latter kind. They refrain from controversies and media appetite that some other people use to get attention. An adequate, efficient and objective search for solutions to a diversity of challenges, that's what real scientists and technologists strive for.

Also the technical world is confronted with several types of non-visible defects. In materials phenomena can appear that are not visible to the human eye, yet can result in extensive damage. In most cases they evolve quite slow, but continuously and without being noticed; creepy thought indeed. As to metals hydrogen embrittlement, Hyrodgen Induced Cracking (HIC), relaxation and creep are certainly the most creepy failure phenomena. These creepy degradation modes of metals will be explained in a new blog series, starting today with the creep phenomenon.

In order to understand creep, it's first of all necessary to get acquainted with the structure of metals. The picture on the right gives e.g. an idea of how the internal structure of a copper alloy looks like. A metal consists of grains, comparable to a snowflake that is build up by many ice crystals. Grain borders are the transition zones from one grain to another. At very high temperatures, such as in a steam boiler or jet engine, and when the metal is subjected to stress, very small cavities could develop at the grain borders. Such cavities develop after a certain period of time due to local weakening of the grain border, that is subsequently disrupted over a very small area. Development of such small cavities is the start of the creep phenomenon. No serious problems are to be expected as long as creep is limited to the presence of some individual voids on the grain borders. Only when the voids start to coalesce and become a line-shaped void along the grain border, corrective actions are necessary. The right part of the picture below this blog e.g. shows the birth of creep, i.e. some individual voids, whereas on the left part some creep voids are ready to coalesce.

When creep occurs, the action that has to be taken and when it should be taken, is dependent on the type of installation, the chance that the component would rupture and the consequences of such a rupture. Measures to be taken could vary from a slight reduction in temperature, a periodic inspection of the creep evolution, a replacement of the component, up to a preventive replacement of the component prior to any creep appearance. The maintenance of jet engines requires e.g. a preventive replacement of the turbine blades, hence before any creep has occurred. As to boiler tubes in a power station a limited number of creep voids is tolerated as long as they do not coalesce etc.

What makes creep creepy is that it develops 'in' the metal, hence hidden for the human eye and, in its initial stages, also non-detectable by non-destructive inspection techniques (NDT). The evaluation of creep initiation and evolution requires a regular verification of the microstructure – particularly the grain boundaries – of metal components that could be susceptible to creep. For metal components that should possibly continue operation if the creep level is acceptable, microstructure verification is performed with 'replica'. In a subsequent blog this technology will be explained into more detail, yet it could be compared to making a plaster cast on microscopic level. This technique allows to detect the initiation of creep in a timely manner, to follow its evolution and to decide on replacement when necessary.

’Safety First', that's what we strive for, day in, day out; for you, together and thanks to you. And 'You', that are our suppliers, our clients and all our great supporters.