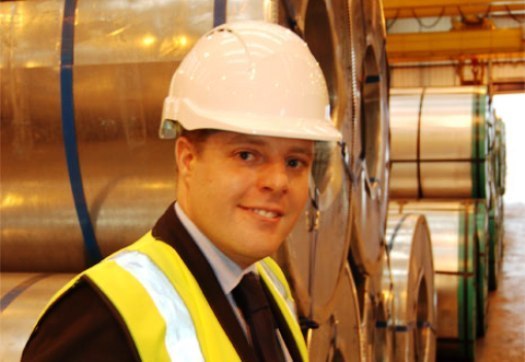 The Port of Liverpool has achieved a 75% year on year increase in steel volumes handled in 2011 thanks to a Ü£1.5m investment in infrastructure and the creation of a new senior management role dedicated to metals.

The significant growth has been supported by around Ü£1.5m of infrastructure investment by Peel Ports, owners and operators of Port of Liverpool, including a new Liebherr harbour mobile crane.

In addition, in April 2011 Peel Ports invested in its senior management team responsible for the steel sector with the appointment of a business development manager for metals, Roy Merryweather (on picture), who has more than a decade of experience in the industry.

Gary Hodgson, managing director of the Port of Liverpool, said: "We are absolutely delighted with our performance in steel volumes this year. When you consider that the UK market indicates 5% growth year on year, then you can see that these results are hugely encouraging indeed.

“This success reflects the total journey economics we can offer importers in that Liverpool offers savings on inbound logistics for all cargos destined for the Midlands and Northwest of the UK.

“The Port of Liverpool demonstrated its commitment to this sector, and our belief in the potential for growth through our major infrastructure investment, with the appointment of Roy Merryweather. Roy has been proactive in attracting new business to the port which has been critical ' and the indications are there are opportunities to grow these volumes further.”

Further proof of the growth in steel volumes is evident in the Port of Liverpool setting a new record earlier this year for steel coil handled and discharged ' some 33,000 tonnes from the MV Blackbird. Within this 1,764 steel coils were handled over which 500 weighed more than 25 tonnes each.

Business development manager for metals at Port of Liverpool, Roy Merryweather, added: "We are encouraging owners of cargo bound for the Northwest and Midlands to bring it in via Liverpool to enjoy the lowest onward cost and these figures show that businesses are receptive to that offering.

“We are also enjoying positive feedback and new business from companies in and around the Liverpool and Manchester area and further afield and the good news is there is more growth potential to target.

“The growth in steel volumes has not only been in bulk shipments, but also in containers and as such we have invested in additional handling equipment for de-stuffing steel products out of containers.”

In April 2011 a new Liebherr harbour mobile crane with 82 tonne capability arrived at the Port of Liverpool, taking the total number in the Peel Ports Mersey fleet to eight. The crane is equipped with real time diagnostic capability and has the ability to handle 82 tonnes at its hook and 41 tonnes when in spreader mode.